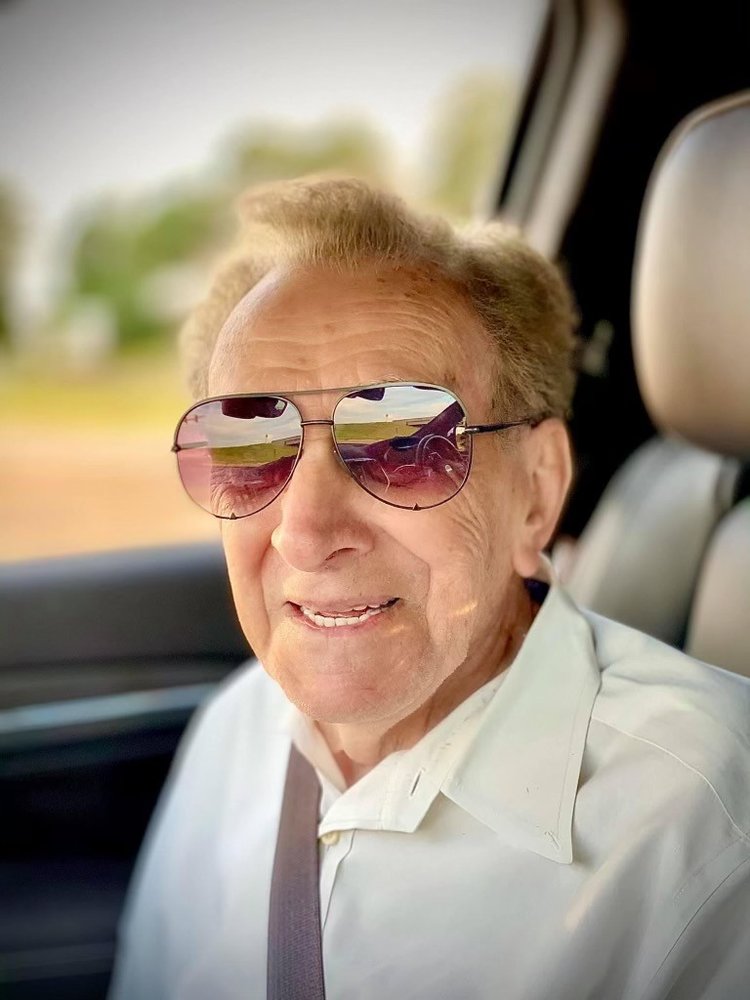 “Rarely do beauty and virtue dwell together as they do in you.”

Mr. Domingos "Uncle Don" Macha Jr., passed away on the morning of Tuesday, the 29th of December 2020 while under the compassionate care and extraordinary services of SouthernCare Hospice. He was 94 years of age.

Uncle Don was born in Rio Claro, Brazil and immigrated to the United States at the young age of 23. He assimilated quickly and loved his adopted country, but always retained a deep connection to his native Brazil. In 1949 Uncle Don’s father, Domingos Sr. wanted him to further his education while learning how to speak the English language. He arrived in Miami where he caught a bus to Louisiana State University in Baton Rouge, LA. On his journey to LSU, he had quite the road trip to say the least. At this time, he spoke no English. The bus would stop from time to time throughout the trip where Uncle Don struggled to order food. He was only able to point and or watch other people order while listening and trying his best to pronounce the words. Due to the language barriers he mostly ate candy bars on his journey. Once he arrived at the bus station in Baton Rouge, he caught a taxi and was dropped off at the LSU entry gates at the corner of Nicholson Dr. & West Chimes St. with two suitcases. He had absolutely no idea where to go or what to do. As he was standing there it started to rain and the idea of coming to America was not so fun as he begins to cry. After about an hour or so of standing there he finally heard a couple of guys walking by who were speaking Spanish. Oh, was he so thrilled! He started to speak to them even though it was in Portuguese. The languages share a lexical similarity, so he was able to speak and understand what they were saying. The two guys took him to the Pan American House (Latin Division) known today as the Acadian Hall. The next day he would officially enroll at LSU, but only stay one semester as he was not learning the English Language as he needed to. He only learned the word hamburger. After consulting with his father back in Brazil, he purchased a car and drove to Berkeley, CA. He would enroll at the University of California where they had special courses in English. While attending school he worked different jobs, but the one that stood out was the job he had at Mikes Restaurant as a kitchen helper. He was so well liked due to his work ethic that when he left in August of 1951 to come back to Louisiana, he was given a letter of recommendation. After a few semesters he decide that becoming a Geologist would be his passion. At that time, the University of California did not offer an undergraduate degree in Geology. With the Oil & Gas boom happening in the 1950’s, Louisiana Tech had a program in Geology where he would find his way back to Louisiana and eventually graduate with a degree in Geology. During his time in Ruston, Uncle Don became a member of the Theta Xi Fraternity. He also worked for Midwest Ice Cream Plant every evening. While everyone was going to parties and collegiate sporting events, Uncle Don would go to work. He never got to see a football game. During the summer he would work offshore on an oil rig to gain experience in the Oil and Gas business. After graduating he spent thirty years working for Mobile Oil in Shreveport, LA. During that time, he met and married the love of his life Fannie Peters in 1958. After marring Fannie, they acquired ownership of Food City in Bossier City, LA alongside her brother S.P. Peters and wife Jean. For several years they sacrificed their marriage and life by living in the back of the store. They did this to save their money so they could purchase a home of their own. After living on Yolanda Lane for many years they built a custom home in The Spring Lake Subdivision in Shreveport, LA. Uncle Don was very proud of his home. He designed every detail while his wife Fannie picked out all the colors, light fixtures, and furniture. It was truly a special place that they both adored and loved for so many years. After his wife passed away in 2007 a very special dog named Mollie came into his life. Mollie was his life. He loved her so much and spent the next 10 years with her. He talked to her, danced with her, took her for long walks, and treated her like she was a queen. Uncle Don adored Mollie so much and would absolutely do any and everything for her. Here is a quote from Jonah Goldberg that Uncle Don had written down for Mollie. “What we see most clearly in dogs are precisely the things we as human beings wish to see in ourselves: loyalty, joy, love, home, family, commitment, humor, and an utter disregard for pieties and pretenses of fashionable life.” Uncle Don added, “She did not care if she was beautiful, rich, or if she was prized – all she cared is that she loved people and that she was loved back.”

Uncle Don was a man of few hobbies although he did enjoy flying small propeller planes. In the 70’s he became a pilot where he flew Cessna Airplanes out of the Shreveport Downtown Airport. He even flew to see an LSU football game. Uncle Don was a member of the Progressive Men’s Club where he enjoyed attending many parties and get togethers. He also had his boat there and loved being on the water. He particularly enjoyed traveling with his wife to Brazil to see his family who he dearly loved. Traveling to Brazil was Uncle Don’s greatest passion outside of family and work. He especially loved visiting and learning about people from different cultures. There are so many stories about Uncle Don that a book could be written about his life. He was loved by so many people and will truly be missed.

In accordance with current Covid-19 protocols and for the health and safety of all parties involved, an invitation only PRIVATE Catholic Funeral liturgy will be held at half-past ten o'clock in the morning on Monday, the 4th of January 2021 at St. Joseph Catholic Church in Shreveport, LA. Rev. Matthew T. Long will officiate. Virtual attendance may be accessed by visiting https://www.stjosephchurch.net The Rite of Committal will immediately follow, at St. Joseph Catholic Cemetery in Shreveport, LA.

The family would like to extend a special thanks to his wonderful neighbors of many years; His doctors, Dr. Randy Del Mundo, MD, Dr. Gerald Henry, MD, Dr. Bryan Lusk, MD; Laci Dayton, RN, Casey Dodson, RN, and all of WK Bossier 3 West.

The family also is forever grateful to Southern Care Hospice for your amazing care of Uncle Don. Cindy, Amber, “Mrs.Shan”, Raven, and Michelle: your dedication to your job and unwavering support does not go unnoticed. Uncle Don appreciated each one of you. We will never forget the comfort and kindness that you gave to Uncle Don and our family during this time.

To order memorial trees or send flowers to the family in memory of Domingos Macha, Jr., please visit our flower store.