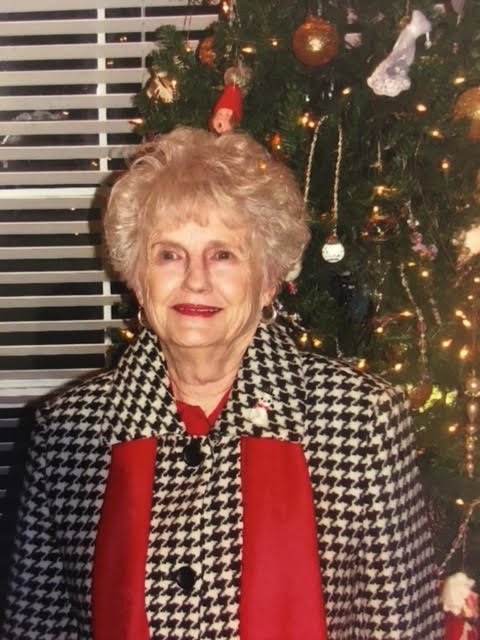 Barbara Beth Taylor Burke, 85, daughter of Otho Opal Taylor and Mary Geneva Reynerson Taylor died peacefully on December 8, 2020. Barbara was born April 12, 1935 in Hope AR and was welcomed to the family which included her older brother and lifelong friend Jack Lowell Taylor. The family lived mostly in Hope until moving to Crossett AR in the early fifties. Barbara later graduated from Crossett High School in 1953. She then attended Southern State College in Magnolia AR and graduated BSBE 1957. While attending college, Barbara met her lifelong love, Travis Dale Burke. The couple was married at First Baptist Church of Crossett on August 25, 1957. This was the beginning of a wonderful 63 year journey together with many stops along the way. After the wedding, the couple resided on the campus of the University of Oklahoma where Travis received his Petroleum Engineering degree in 1959. Barbara worked for the Oklahoma University Athletic Department and later for Western Electric in Oklahoma City during the first stop in Oklahoma.

Travis’ 34-year career with Halliburton Services took the couple to reside in ten different places including Shreveport & Bossier City LA, Oklahoma City OK, Midland TX, Caracas Venezuela, Englewood CO, Katy TX (among others) and finally to retire in Benton LA. Barbara was first and foremost a warm and supportive wife and mother to her two sons, David & Michael. At each stop along the journey she made a beautiful home for her family and got to work finding a church home and making new friends. For several years she worked as an office administrator or taught high school. She was a talented pianist who was continually active in Baptist churches; church pianist; accompanist of children choirs; director of children’s bell choir; Leader of Home bound and Nursing Home Visitation; Sunday School Class newsletters; member of Seasoned Servants SS Class of Airline Baptist Church. She enjoyed sharing her love for music with her grandchildren. Barbara enjoyed being creative on her computer and was administrator for several groups including Hope High Class of 1953 where she attended through 10th grade.

Barbara is survived by her husband Travis, sons David of Keller TX, Michael (Tammy) of Bixby, OK, Brother Jack Taylor (Sue) of Kingwood TX, Five grandchildren: Nathan, Emily, Tanner, Christian and Sam, as well as numerous cousins, nieces and nephews who will all miss her friendliness, kindness and warm smile.

The family is grateful to The Carpenter House of Shreveport, as well as, many family and friends for making Barbara’s end of life journey much easier for all of us. If you would like to donate in Barbara’s honor, please consider St Jude Children’s Research Hospital, Alzheimer’s Association or a charity of your choice. Due to the current Covid situation the family has chosen to honor her privately.

To order memorial trees or send flowers to the family in memory of Barbara Beth Taylor Burke, please visit our flower store.