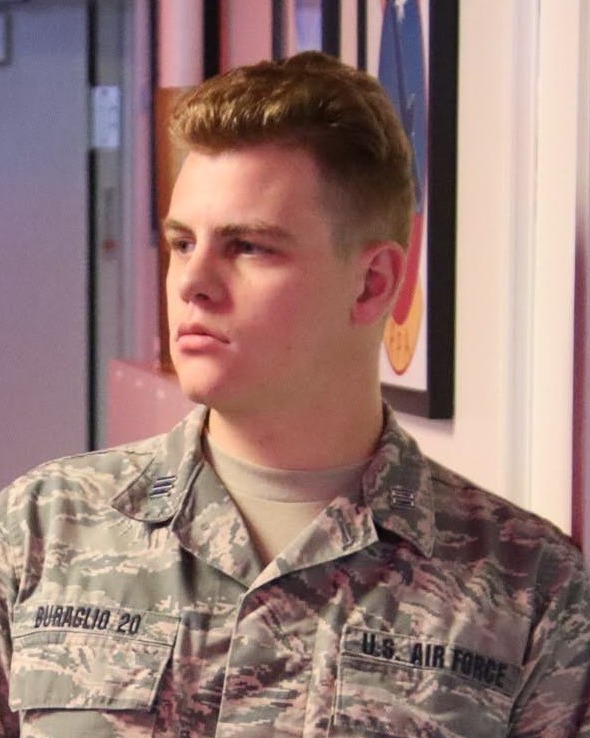 Hand delivered by a local florist

Our hearts are broken in announcing the passing of Lieutenant Dominic Clayton Buraglio, an Air Force officer raised in Carmel Valley, California, during his active duty assignment at Barksdale Air Force Base in Shreveport, Louisiana. He was a compassionate, thoughtful, and humble soul who had a positive impact on the lives of many during his short time on Earth.

Dominic attended Tularcitos Elementary, Carmel Middle School, and Carmel High School before earning an appointment to the United States Air Force Academy, where he graduated in 2020 with a degree in computer science. He was serving at Barksdale AFB as a Cyber Defense Technician, overseeing a team responsible for maintaining a $34M weapons system network. Dominic is survived by his parents, Donald and Tiffany Buraglio, his sisters Sophia and Giana, aunts Trina Clayton and Christine (Brian) Nicks and family, and grandparents Sue and Doyle Clayton, Francie and Michael Gundzik, and Rockne Buraglio. He was preceded in death by his grandmother Barbara Buraglio.

From his earliest days, Dominic had a passion for science and technology, and an inquisitive drive to understand the mechanics of how complex systems operated. His childhood love of heavy machinery and trains morphed into a lifelong passion for intricate Lego constructions, which in turn developed into mastery of robotics and drone operation. Dominic was the captain of the Carmel High School robotics team, and active with Remote Piloted Aircraft (RPA) programs at the Air Force Academy. His analytic and methodical mind was a perfect fit for his career in military computer operations and security.

Dominic had an intensely compassionate heart, and a continual desire to serve others, particularly those who are typically overlooked or marginalized in society. At an early age he proposed and organized relief efforts in the wake of natural disasters. He spent every spring break of his high school years performing service work in Mexico, helping to construct shelters and showing love to people in extreme poverty. He was a strong advocate for the LGBTQ+ community, and an opponent of social injustices that harmed groups who are frequently oppressed. His commitment to service fueled his desire to pursue a career in the Air Force, where he hoped to leverage his natural gifts to serve his country, both in protecting our nation from harm, and being a positive influence within the culture of the military. Dominic’s mission ended far too soon, but his sense of duty and his willingness to put others before himself never faltered.

Among other interests, Dominic appreciated the beauty of nature through numerous hikes in the mountains, especially Yosemite National Park. He was supported by a loyal friend group who enjoyed trivia nights, movie marathons, Dungeons and Dragons gatherings, and nighttime adventures in Hastings Preserve. He cherished his sisters and grandparents, and he looked forward to every military leave as an opportunity to spend time with the family he loved. Those are the times we’ll miss the most deeply, but we’re blessed and grateful beyond words for his presence in our lives for 24 years.

Farewell and Godspeed, Dominic. We love you to the moon and back.

Memorial services will be held at Barksdale Air Force Base for Dominic’s military squadron on December 13, and on the Monterey Peninsula for family, friends, and community at a date and location to be determined. In lieu of flowers, please consider donations to the Human Rights Campaign, the Read to Me Project in Monterey County, or the Yosemite Conservancy.

To order memorial trees or send flowers to the family in memory of 1Lt Dominic C Buraglio, please visit our flower store.